At the last Ottawa Sybase User Group (OSUG) meeting we had a surprise guest presenter arranged by OSUG president Chris Pollach. This also included a demonstration of a special PowerBuilder application that was written to – you might not believe this – run and emulate any standard NHL Hockey Scoreboard. Yes, you read that correctly, interface to a very complicated score board hardware system. Obviously, this is not your average PowerBuilder application but one that long time PB enthusiast Chris Pollach likes to show case as Chris has always maintained that “you can build any type of Windows application using PowerBuilder”! To that end, Chris has proven that aspect over and over again with applications like multi-media players, Application / DB Server Monitors, SQL Extraction & Analysis utilities, DataWindow Changer, Code Commenter, MS-Agent, O/S System Resource Introspection, and many more bizarre applications that most people would not at first consider PowerBuilder for.

This system is another excellent example of what Roland Smith of TopWiz Software likes to say “Anything is possible given enough time, money and Mountain Dew”! In this case, we have Mr Jeff Courtice of CourByte Consulting Group Inc who pushed the outside envelope of what typical applications PowerBuilder developers might build. Jeff, a long time PB consultant in Canada’s National Capital area who has worked on elite PowerBuilder applications like Elections Canada System that runs all federal elections right across Canada - decided that he wanted to take a break from these high-end business systems and build something that he wanted PowerBuilder to solve. In his case, after being involved with minor hockey due to his son’s participation in the sport and Jeff’s frustration with dealing with the various scoring systems decided to “build a better mouse trap” in the form of more intelligent scoreboard application software! 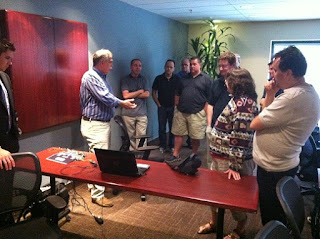 A few years ago Jeff decided to start an application that would emulate a hockey scoreboard as he found in real life; as these systems can be quite varied, hard to learn for the novice, poorly documented as their operation and offer no proper training along with their products. To this end, Jeff built a PB application that would visually display the various popular scoreboards including their control panels. Then the application would guide the user through the mechanics of how that scoreboard worked and allowed the student to actually score a virtual game and see how the scoreboard would react to the various inputs. In a few months, Jeff had a basic emulation working of a typical scoreboard. With this early success, Jeff decided to continue his endeavour adding more scoreboard types and better simulations. Then, another revelation occurred to Jeff ... why not build his own scoreboard and challenge the actual manufactures of the current hardware! To this end, Jeff decided to build a new product called Time-Keeper Professional or TKP for short. Thus Timekeeper-PRO ( TKP) was born and is a software program developed in Powerbuilder 11.5 and SQL Anywhere 11 to run on a standalone computer in the timekeeper/scorekeeper’s booth in hockey games.  It will perform the role of expert timekeeper/scorekeeper where none exists.  Timekeeper-PRO was designed from the ground up to be a simple to use tool that would automatically make any timekeeper/scorekeeper an expert without having to know the myriad rules of hockey as they apply to off-ice officiating. Many seasoned PN developers do not realize that simple RS232 serial port communication can be accomplished in PB by using the FileOpen, FileRead and FileWrite built-in commands. You can actually open any PC’s COM port via the FileOpen command and then read and write data streams to any device listening on the port. Typical devices could be cash registers, RFID programmers, security systems and oh, of course – hockey scoreboards.

Anyone who has ever been involved in timekeeping and score-keeping in a hockey game when the game gets intense and there are many penalties being tracked concurrently knows that the job can get extremely difficult and pressure packed.  Timekeeper-PRO’s approach was to simplify the timekeeper/scorekeeper’s life is straightforward.  Simply enter data corresponding what the on-ice referees say and the software will do the rest without any knowledge of the rules.  Among many other features, TKP will automatically track offsetting penalties and will automatically determine such things as when an extra player is required to sit for another player’s penalty.  TKP will automatically generate the game-sheet thereby eliminating the need to hand scribe the information during the game.  TKP clearly displays time remaining for penalties that are not displayed on the scoreboard – ie – off setting penalties and it will automatically adjust them when necessary as goals are scored.  TKP also has an integrated communications component responsible for distributing near real-time game statistics to registered email recipients and to league websites.

Over the course of the TKP development process a separate initiative was undertaken to design and build a fully functioning and complete electronic scoreboard to be controlled by TKP.  This was undertaken as joint venture between the Ontario Centre of Excellence (OCE), Algonquin College and Courbyte Consulting Group.  As part of the College’s Electronics Technologist program, four electrical engineering students were tasked with the job of designing and building the scoreboard.  They were successful in their task and were awarded first place amongst all Ontario colleges participating in the OCE program.  In addition to building a full sized scoreboard (12’x5’ and 300 lbs), a mini-scoreboard was also designed and built to use as a proof of concept and also as a sales tool for displaying at trade shows where space is expensive and most often at a premium.

Timekeeper-PRO has now been extensively tested at the junior hockey level where the frequent need for tracking multiple penalties and goals is prevalent.  Timekeepers that have assisted in the testing of this revolutionary new product have been amazed at the power of the product and often are heard to say “that it’s about time a product like this was developed to make timekeeping and score keeping a less onerous task”. Jeff has now decided that not only does he have a product that can easily control any major commercial scoreboard system – he now has actual scoreboard hardware that he estimates could be built at a fraction of the price many commercial systems are priced at today. To this end, Jeff is now talking to potential electronic manufactures that might be interested in taking on his design. 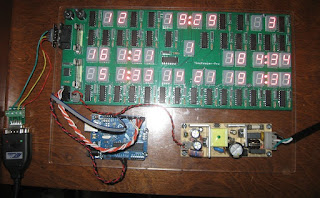 The latest version of TKP has even grown the functionality further by allowing the application to post the current hockey game statistics to the internet where Jeff has another PB application that can display the current game vitals on his website, email parents who cannot attend that their son or daughter has scored a goal and even print out official game reports that can be sent into the various hockey leagues. Jeff also has a “ton” more ideas for this unique PowerBuilder application for sure and OSUG members were exceptionally impressed with his system. Even SAP Sybase Technical Evangelist John Strano in attendance at the last OSUG meeting was also suitably impressed over Jeff’s scoreboard application. 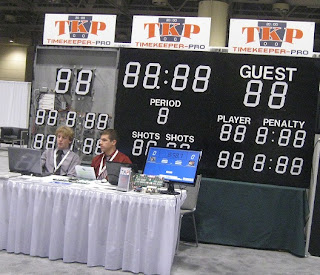 For more information on the TKP application, have a look at the YouTube video of the actual TKP application in action at http://www.youtube.com/watch?v=XNleZ2gqUdM. To experience the actual TKP training emulator application, have a look at this YouTube video: http://www.youtube.com/watch?v=VPUboSNegSI
Also, feel free to drop Jeff an email as well for more information on TKP (http://www.timekeeperpro.ca) or to just cheer him on in this unique endeavour!

Posted by Chris Pollach at 6:22 PM