The Charlotte PowerBuilder Conference will bring the latest news and information on all things PowerBuilder while Appeon Corporation will have product experts available to present the latest product road-map and answer questions on the current and future plans for PowerBuilder. This is your opportunity to have your questions answered and see how to modernize and extend your applications first hand.
Learn how to quickly modernize and extend your PowerBuilder applications with Web, Mobile, and Cloud technologies from Appeon Corporation. Attend sessions on current GUI design and application development from industry veterans. Workshops on topics such as beginning mobile development, getting the most out of your source control system, and the "how to" of working with application frameworks are in the mix right now.

More than fifty hours of PowerBuilder specific content is planned for the Conference.  You will not find a better PowerBuilder value for your hard earned dollars anywhere else in North America.  Preregistration for this three day event is currently only $295.00 USD (that's 40% off the normal registration price of $495.00).


Now is your chance to enrich the PowerBuilder Community by presenting a session at the conference. Showcase your achievements in front of your peers and help us all grow through exposure to new thinking and updated ideas. Session length may be either 60, 90, or 120 minutes. Demo type presentations should be limited to sixty minutes; in depth technical discussions or detailed analysis/examples would be more appropriate for a 90 or 120 minute time slot. Sessions need to be educational and technically focused with intermediate level topics being encouraged. Speakers must be available to present during the entire span of the conference (May 6-8, 2015). We offer complimentary registration to approved speakers. The deadline to submit a session for consideration is January 31, 2016. Notifications of acceptance will be sent out by the end of February at the latest.

For more information, please go to www.ncpbug.org and submit your session idea today!

Posted by Chris Pollach at 6:53 PM No comments: 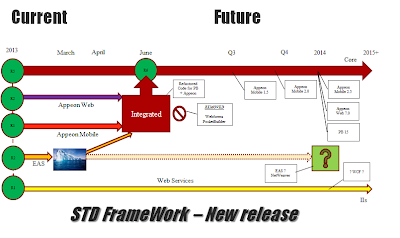 For those of you who are not aware what has been transpiring over the past several months, in the middle of May with SAP announcing it had signed a Memorandum Of Understanding  (MOU) with Appeon. After signing the MOU, Appeon went hard to work to understand what customers want out of PowerBuilder and what is technically feasible. Appeon then put together a vision, technical architecture, and road-map for PowerBuilder, which was the result of months of hard work. They conducted market surveys to thousands of users, held conference calls with hundreds of customers and even had extensive discussions with their most active partners and members of the PowerBuilder community. Appeon even analyzed real-life customer code, some having more than a gigabyte of PBLs of PowerScript code and created numerous proof-of-concepts in Appeon’s labs.

Appeon has now put together a vision, technical architecture, and road-map for PowerBuilder, which was the result of months of this hard work. If you would like to understand Appeon’s vision and future direction for PowerBuilder you can now sign up for a 5-part Appeon Webcast series! The first Webcast will kick-off on October 29. You can register by following the link below ...

During the webcasts, Appeon will be communicating their vision, technology, and road-map in a 5-part Webcast series as there is just too much content to communicate and digest in just a one single Webcast. At the end of each Webcast Appeon also wants to give PowerBuilder customers the opportunity to give them feedback, which they will use to fine-tune the detailed technical architecture and road-map. Setting the future of PowerBuilder is a big decision that can affect tens of thousands of companies and you specifically. This is why Appeon are trying to give as many customers as possible a chance to be heard. I strongly urge you to participate in this Webcast series.

With the release of the new STD Integrated Framework for PowerBuilder and Appeon (version 2015.4.0.43 and higher), the framework was enhanced to deliver a new feature - Dynamic Application Profiling. The the Application Profiling feature has been available to native PB applications for many, many releases - but, only when running the application from the PB IDE or when a developer remembered to code the TraceXxxx () commands in their application. The framework's Dynamic Profiling feature though can be activated by the application user, developer, QA or Support specialist at anytime by selecting the keyboard CTRL+SHIFT+F2 keys in succession. The feature is also self contained and ready to use at a moments notice with no programming required by the developer what so ever!

The Profiling feature can be activated by either: a) launching the frameworks DEBUG/SPY feature ( CTRL+SHIFT+F1 ) or b) using the direct short-cut ( CTRL+SHIFT+F2 ). In the case of the Debug/Spy, the application user will now notice a new command button located on the lower right-hand side named "Profiling...". When pressed, this command button will open the new Profiling dialogue:
The Profiling dialogue built into the Integrated framework contains all the options to fully engage all of the PowerBuilder Application Profiler options normally available from the IDE. Once activated, all the application user needs to do is: a) select what aspects of the application they would like traced; b) provide a name for the trace [which will appear on the various reports] and c) select/set a trace file name. Once these items are completed, Application Profiling can be started by selecting the "Profile ON" command button, as follows:


When the Application Performance Profile file has been created & populated, the file can now be sent to the application developer. The PowerBuilder developer will then launch the PB IDE and run the Profile Reporting Tools by selecting File=>New from the IDE's main menu. In the corresponding dialogue the developer can now choose one of three Profile Viewing options:  Class, Routine or Trace, as follows:

From this point onward, the PowerBuilder developer may now drill down through the various viewer options to "zero in" on the problem performance area of the application. The three viewers will contain a plethora of information about the application's execution. Here are some examples of the viewer reports that you may generate: 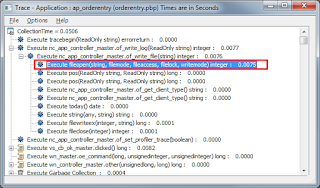 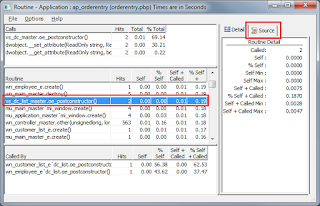 Hopefully, this detailed performance trace information will allow the PB developer to pinpoint latent code and then optimize the application code for maximum performance and minimum user processing delay. The nice thing about building your PB Applications from the STD Integrated Framework is that the Application Profiling feature is always a keyboard stroke away - even in Production. Like the old American Express credit card commercials that said "don't leave home without it" ... the Application Profiling feature has a similar statement  ... "don't deploy without it" and "look ma, no hands (ahhh ... coding

Posted by Chris Pollach at 8:40 PM No comments:

With the release of the new STD Integrated Framework for PowerBuilder and Appeon (version 2015.4.0.43 and higher), the framework was enhanced to expose the Debug/Spy feature that has been available to native PB applications for many releases. The framework's Debug/Spy feature is normally activated by the application user selecting the keyboard CTRL+SHIFT+F1 keys in succession. This key sequence informs the framework to display a dialogue that shows the application user the various PowerBuilder classes in vogue for the dialog in focus.

In the Web Browser and especially in the Mobile world, the keyboard CTRL+SHIFT+F1 sequence is either not recognized or physically impossible on a virtual keyboard. The latest STD Integrated Framework has been enhance to work around these limitations. This feature of course is most valuable to the Application Developer and Quality Assurance personnel to introspect the active classes with a business dialogue. This can be key pieces of information in isolating what components are active within a problem area of an application. However, given hard to pin-point issues in production - even the application business user can be instructed to use this feature to collect critical information about a problem area in the application.

For the Web and Mobile world, the first step in activating the Debug/Spy feature is logging into the AEM (Appeon Enterprise Manager) console for the related Appeon Server that is serving up the Web and/or Mobile application. Within the AEM, navigate to the Application => PB Features => INI settings area of the console. Once located, select your Web/Mobile application's INI file. This file of course will be the one you were supplied with by the STD Integrated Framework. Within the INI file, scroll down and locate the [DEBUG] section and within that area, the "Debug_Mode" keyword. Most likely, the current value assigned to this keyword is "N". You will need to change that value to "N", as shown: 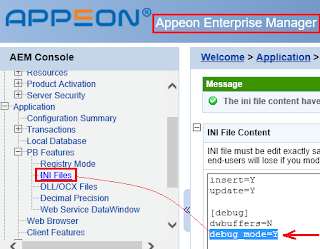 Once the "Debug_Mode=Y" value has been set, restart your Appeon Mobile or Web based application. You should now notice that the Integrated framework has automatically exposed two extra menu features: a) a new Menu Item entitled "Debug" located to the far right hand side of the horizontal text menus and b) a new "Debug" icon appearing to the far right-hand side of all related toolbars. Selecting either menu item or toolbar item will direct the framework to display the following Debug/Spy dialog: 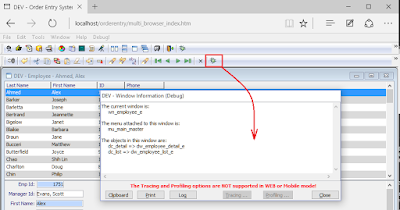 On the Mobile Android or iOS equipped devices, the menu item text or their toolbar icons are displayed as drop downs available from the AWS (Appeon Work Space) shell when running your PowerBuilder application. Within the AWS, the new "Debug" and icon are displayed similar to the Web Browser above. Again, selecting either the menu text (debug) or its associated debug icon will engage the Debug/Spy framework dialog, as follows: 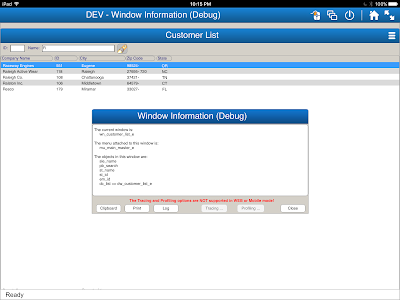 Once the Debug/Spy dialogue is activated, the application user can copy, print and/or email the component diagnostics to the appropriate support personnel for further analysis. It should be noted though that the Tracing and Profiling (another new feature) are only available to native PowerBuilder applications and thus those options are disabled in the Web and Mobile environments.

I hope that this new innovative framework feature is of significant help when trying to analyze problem areas of your PowerBuilder and/or Appeon applications. 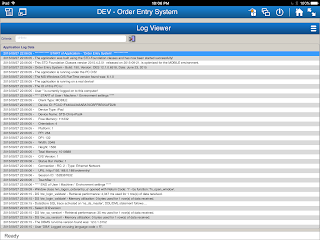 Posted by Chris Pollach at 6:48 PM No comments:

The example OrderEntry application that is built from the Software Tool & Die PowerBuilder & Appeon based frameworks has been updated to use the latest version of the Integrated framework (v2015.4.1.45) and the latest version of the Web Service framework (v2015.3.1.52). With the two frameworks enabled, the OrderEntry application demonstrates how PowerBuilder and Appeon developers can fully extend the functionality of their business applications to support native, cloud, web and mobile development & use from one code-line! 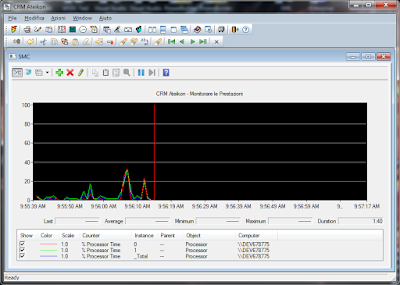