One normally thinks of PowerBuilder TV as the PBTV website that contains great information about the PowerBuilder product. However, what I am talking about today is putting PowerBuilder on your TV! Yes, you read that right ... put your PowerBuilder applications on your TV and interact directly with them. You can do that today, thanks to the Appeon Mobile product from Appeon corporation.


New televisions or even older ones can now have Android enabled boxes attached to them or "smart" TV's may come pre-loaded with the Android operating system built in. In my case, I am using an MXQ Pro Android media box in this article attached to my Samsung TV. The MXQ box is a quad processor based system with the Android 5.1 O/S loaded on to its ROM with 32G of RAM memory on board. That being said, these media boxes or on-board TV computer based Android systems are more than capable of hosting the Appeon Mobile Work Space (AWS) application that will in turn host any PowerBuilder application that can be deployed to an Appeon 2016 server.


The Android O/S on your SmartTV or the media box typically has a similar user interface to your Android phone or tablet. The O/S has all the typical bells & whistles like a file manager, web browser, system console, etc ... all the ingredients you need to load the AWS application on to the droid system. So the first action is to start the Chrome web browser and point it to your Appeon Server - for example:  http://

A whole new horizon has now opened up for PowerBuilder applications thanks to Appeon!

Appeon Corporation is seeking to establish a worldwide network of seasoned PowerBuilder professionals who share their passion for PowerBuilder.  Regardless of whether you are an independent consultant or part of a larger consulting company, Appeon hopes that you will join their efforts in building a thriving ecosystem around the new generation of PowerBuilder!

Regards ... Chris
Posted by Chris Pollach at 7:49 AM No comments:

Come check out Appeon’s new website that now includes Appeon PowerBuilder in its portfolio! Do a Live Chat with the Appeon sales team, browse various Appeon & PB videos, check out the FAQ’s on the upcoming Appeon PB, Review PB’s new road-map, check out the new “Developer” section, and much, much more!

Also, check out the huge savings on pre-ordering Appeon PowerBuilder before December 31, 2016 .... 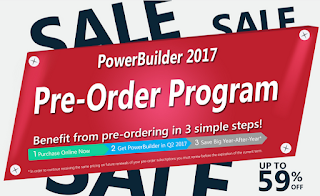